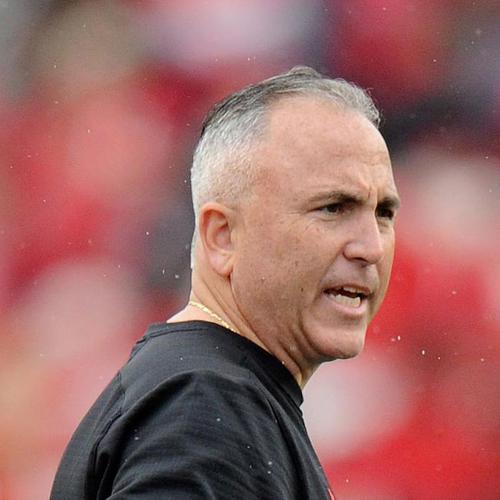 Talks covered by this speaker

Inside Zone Play with Variations & RPO's

Have you got yours yet?

Our All-Access Passes are a must if you want to get the most out of this event.

Flood spent the last two seasons coaching the offensive line at Alabama alongside Steve Sarkisian, guiding this past year’s group to earn the 2020 Joe Moore Award as the nation’s top unit. The line paved the way one of the top offenses in Alabama history that propelled the Crimson Tide to the National Championship. In the past two seasons, Alabama put together 24 straight games in which the offense scored 35 or more points, the longest streak in major college football history.

This season, Alabama's offense ranked second in the nation in scoring and led all Power 5 schools with 48.5 points per game, which set a school record and included five 50-point games against Southeastern Conference competition. The Crimson Tide became the first team in league history to record five such games in a single season in conference play. The Tide followed that by posting 52 points against Florida in the 2020 SEC Championship to earn the No. 1 seed in the College Football Playoff. They later matched that total in the National Championship Game against Ohio State.

Alabama led the nation in third-down conversion percentage (58.9), team passing efficiency (198.99) and completion percentage (76.2), and ranked fourth in the nation in total offense at 541.6 yards per game to break the school record. The offense boasted the Heisman Trophy winner in WR DeVonta Smith, another finalist in QB Mac Jones, who won the Davey O’Brien Award, and the fifth-place finisher in RB Najee Harris, who won the Doak Walker Award. It made Alabama the second team ever to place three players in the top five of the same Heisman vote, joining 1946 Army with Glenn Davis, Doc Blanchard and Arnold Tucker. Blocking for that group was an offensive line that won the Joe Moore Award and was anchored by two consensus first-team All-Americans in Outland Trophy winner LT Alex Leatherwood and Rimington Trophy winner C Landon Dickerson.

The 2019 Alabama offense averaged a then-school-record 47.2 points per game, which ranked second nationally, while averaging 510.8 yards per game, which was sixth nationally and is currently second on school record. Alabama’s 199.61 passing efficiency rating was not only a school record, but the second-best mark in NCAA history. Leatherwood earned first-team All-America honors, while OT Jedrick Willis was tabbed second-team All-America. Four members of the Crimson Tide offense went on to be drafted in the first 15 picks of the first round, including Willis (No. 10/Cleveland Browns). The full line, which included Leatherwood, Willis, Dickerson, Evan Neal and Deonte Brown, was a finalist for the Joe Moore Award and ranked third nationally and first in the SEC, surrendering just .92 sacks per game.

Flood took over Alabama’s offensive front after two years on the Atlanta Falcons’ coaching staff in 2017-18 where he was also with Sarkisian. He worked with a line that only allowed 24 sacks in 2017 – tied for the third lowest amount in the NFL. Flood’s guidance in his first year in Atlanta was also shown by the group’s ability to sustain blocks as the Falcons line helped create 230 big plays (plays that are 10-plus yards). In 2018, the offense finished in the top 10 in the NFL in passing yards (4th/4,653 yards), total yards (6th/6,226 yards) and 10th in scoring (25.9 ppg).

From 2012-15, Flood guided the Rutgers football program as part of 11 seasons on staff in Piscataway. He became the first head coach in school history to lead the program to three bowl appearances in his first three seasons at the helm and finished with a 27-24 overall record.

Flood’s first year as head coach at Rutgers was as memorable as any in Scarlet Knights football history. He guided Rutgers to its first Big East Championship, earned Big East Coach of the Year honors and won more games (nine) than any rookie head coach in school history.

He led Rutgers through their transition to the Big Ten conference in 2014, capped by a win in the 2014 Quick Lane Bowl. Flood guided Rutgers to eight wins that season – the program’s first year as a member of the Big Ten. The Scarlet Knights won all five of their non-conference games and earned Big Ten victories over Michigan, Indiana and Maryland. The Knights were also honored in 2014 with their first-ever Lambert-Meadowlands Trophy, which goes to the top team in the East in the Bowl Subdivision.

In 2015, Flood had six different players earn All-Big Ten accolades. Those included Leonte Carroo, who left as the program record holder with 29 receiving touchdowns. The 2013 season saw the Scarlet Knights earn a trip to the Pinstripe Bowl in New York’s Yankee Stadium.

During his tenure as the head coach at Rutgers, his teams mounted two of the largest comebacks in school history. In 2014 at Maryland and 2015 at Indiana, the Scarlet Knights erased 25-point deficits to earn victories.

During his time at Rutgers, the offensive line consistently produced top-level talent, including several players who went on to the NFL. All-American Anthony Davis became the highest player ever drafted in Rutgers history as the 11th overall pick of the 2010 NFL Draft. Darnell Stapleton started in Super Bowl XLIII for the victorious Pittsburgh Steelers. Jeremy Zuttah started 117 games over nine seasons in the NFL after playing for Flood.

Flood arrived at Rutgers after three seasons at the University of Delaware, where he helped the Blue Hens to a 30-11 record, including a 15-1 mark in 2003 on their way to the NCAA FCS National Championship and a share of the Atlantic 10 title in 2004. He also served as assistant head coach and recruiting coordinator during his stint.

Prior to his time at Delaware, Flood was the offensive line coach at Hofstra from 1997-2001. While at Hofstra, he helped the Pride earn berths in the NCAA FCS playoffs in 1997 and 1999-2001. The Pride were among the top offensive teams in the nation during his tenure, ranking second in total offense, fourth in passing and fifth in scoring in 2001.

A 1993 graduate of Iona College, Flood was a four-year letterwinner for the Gaels. He earned first team All-Liberty Conference honors in 1991 and served as team captain of the Gaels in 1992. Following college, Flood spent four years teaching in the mathematics department at his alma mater St. Francis Prep in Fresh Meadows, New York. During that time, he coached the offensive line and defensive lines for St. Francis’ legendary head coach Vince O’Connor.

His first college coaching position came in 1995-96 as offensive line coach at Long Island University-C.W. Post. While coaching at C.W. Post, he helped the team to the ECAC Division II Eastern title in 1996.

A native of Bayside, N.Y., Flood and his wife, Amy, have three children, Kyle, Isabella and Joseph.

Your logo could go here!

If you'd like to get your brand in front of attendees following the categories this speaker is talking about (on this page, via email and during each talk) contact us.