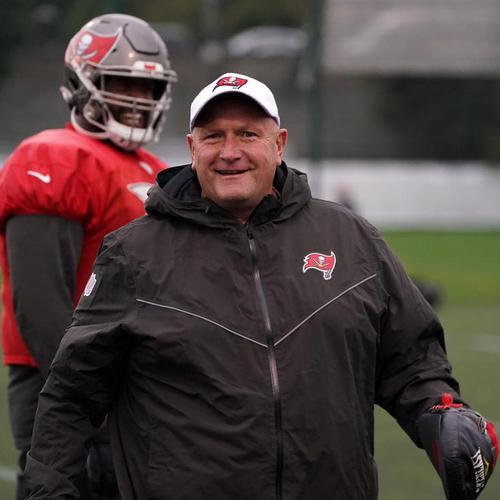 Talks covered by this speaker

Have you got yours yet?

Our All-Access Passes are a must if you want to get the most out of this event.

A 34-year veteran of both the collegiate and professional coaching ranks. He returned to the NFL after a stint with Arizona.

Much of Gilbert’s time in Indianapolis tasked him with protecting franchise quarterback Andrew Luck. The combination of a stout line and Luck’s prowess resulted in three-consecutive 11-win seasons and playoff appearances from 2012-14. The 2015-16 seasons saw the Colts finish and even 8-8 each season, before a disappointing 4-12 season in 2017 which came in the absence of Luck, who missed the entire season due to injury. Still, throughout the six seasons, the Colts set numerous franchise records that were no doubt achieved in part because of Gilbert’s diligent work with the offensive line during his tenure.

In 2016, Gilbert helped with the development of one of the youngest position groups on the team. The Colts utilized seven different starting offensive line combinations and led the NFL with 34 rookie starts. Indianapolis was the only team in the league to start four different rookies along the offensive line as center Ryan Kelly (16 starts), tackle Joe Haeg (14 starts), tackle Le’Raven Clark (three starts) and center Austin Blythe (one start) all saw action. Kelly was one of 11 rookies in the NFL to start all 16 games. Haeg became the first rookie in the league to start at three positions along the offensive line (left guard, right guard and right tackle), since Kyle Turley, a first-round draft pick in 1998. Over the final eight games of the season, the Colts tied for the seventh-fewest sacks allowed (13.0) in the NFL. The unit paved the way for running back Frank Gore to rush for 1,025 yards and become the first Colt to eclipse 1,000 yards rushing since Joseph Addai in 2007. The group provided protection for quarterback Andrew Luck to finish in the top 10 in the NFL in passing yards (4,240, eighth), passing touchdowns (31, fifth) and passer rating (96.4, ninth), while wide receiver T.Y. Hilton claimed the NFL receiving title (1,448 yards) and earned his third consecutive Pro Bowl nod.

Gilbert guided an offensive line that used six different starting lineups throughout the season in 2015. Versatile guard Joe Reitz started a career-high 14 games at right tackle (10), left tackle (three) and right guard (one). Gilbert was influential in the continued development of second-year tackle/guard Jack Mewhort, who started all 16 games for the first time in his career. Gilbert also tutored rookie seventh-round pick Denzelle Good, who started the final four games of the season at right tackle. The offensive line blocked for Gore, who totaled 260 carries for 967 yards and six touchdowns. His 967 rushing yards ranked third in the AFC and were the most by a Colts running back since 2007 (Joseph Addai, 1,072).

In 2014, Gilbert worked with an offensive line that saw 11 different starting lineups throughout the year. The line helped pave the way for the team to set franchise single-season records in net yards (6,506) and net passing yards (4,894), while recording its second-highest point total (458) for a season. The Colts allowed only 29.0 sacks in 2014, which ranked eighth in the NFL and was the lowest total for the team since the 2010 campaign.

In 2013, Gilbert coached an offensive line that blocked for Luck to throw for 3,822 yards and 23 touchdowns, while only allowing 32.0 sacks on the year, which ranked sixth in the NFL and fourth in the AFC. Indianapolis rushed for 1,743 yards on the season, which was the highest total for the team since 2006. Gilbert managed an offensive line that saw seven different starting lineups throughout the season. Tackles Anthony Castonzo and Gosder Cherilus were mainstays on the line, as they both started all 16 games.

In 2012, Gilbert assisted with a Colts offensive line that provided time for Luck to set NFL rookie records for passing yards (4,374), attempts (627) and 300-yard passing games (six). The line also opened holes for a Colts rushing attack that generated 27.5 rushing attempts per game and 104.4 rushing yards per game, which is the most for Indianapolis dating back to 2007.

Gilbert joined the Colts following three seasons at the University of Illinois. He was the assistant head coach/offensive line coach from 2010-11 after joining the Illini as the team’s offensive line coach in 2009. Gilbert guided an Illinois offensive line in 2010 that paved the way for school records in total points and points per game, as well as running back Mikel Leshoure's school-record 1,697 rushing yards. The Illini led the Big Ten and ranked 11th in the nation in rushing.

In 2009, Gilbert guided an offensive line that assisted the team in averaging over 200 yards rushing per game, which ranked second in the conference and 17th nationally. He tutored Second Team All-America selection, Jon Asamoah, who was the team MVP, becoming the first offensive lineman to earn the honor since 1976. Asamoah was a third-round draft pick of the Kansas City Chiefs in 2010. While at Illinois, Gilbert also tutored Jeff Allen who was selected in the second round of the 2012 NFL Draft by the Chiefs and has started 50-of-58 games over the last five seasons (2012-16).

Before coming to Illinois, Gilbert spent one season at the University of Houston (2008), where he led an offensive line that helped the team rank second in the nation in passing and total offense and 10th in scoring offense. The Cougars averaged 562 yards of total offense and 40 points per game as the line blocked for quarterback Case Keenum's 400 yards of total offense per game. Houston also featured 2008 All-Conference USA first-team selection, tackle Sebastian Vollmer, who has started 80-of-88 games for the New England Patriots over the last eight seasons.

Gilbert arrived in Houston after spending the 2007 campaign at the University of Toledo. He coached the tight ends in 2007, his second stint on the Rockets coaching staff. Gilbert worked with the offensive line at Toledo from 2001-03 before leaving to take the offensive line coaching position at the University of Central Florida, where he spent three seasons (2004-06).

Gilbert was a standout at Horseheads (N.Y.) High School where he earned All-Twin-Tier honors before attending Hamilton College in Clinton, N.Y. A four-year starter on the offensive line at Hamilton, Gilbert was a three-time all-conference selection, and in his senior season, became the first Hamilton player to earn First Team All-America honors.

A 1983 graduate of Horseheads High School, Gilbert earned a bachelor's degree in government at Hamilton in 1987. He and his wife, Cheryl, have one daughter, Madison, and three sons, Nicholas, Joseph and Timothy.

Your logo could go here!

If you'd like to get your brand in front of attendees following the categories this speaker is talking about (on this page, via email and during each talk) contact us.
We use cookies This website (and some of its third-party tools) use cookies. These are important as they allow us to deliver an exceptional experience whilst browsing the site. Learn more about our cookie policy. By closing this banner, scrolling, clicking a link or continuing to browse, you agree to the use of cookies. Accept
I need help
No I need help
No I need help